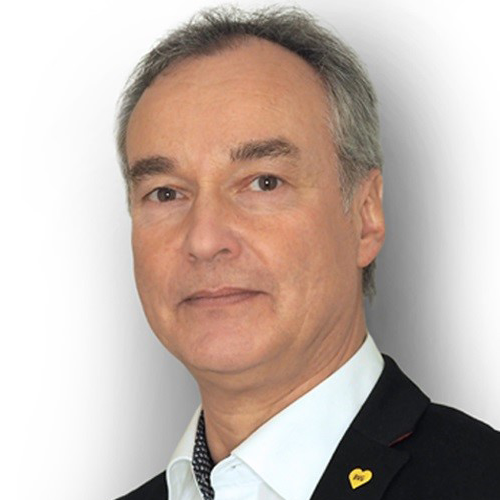 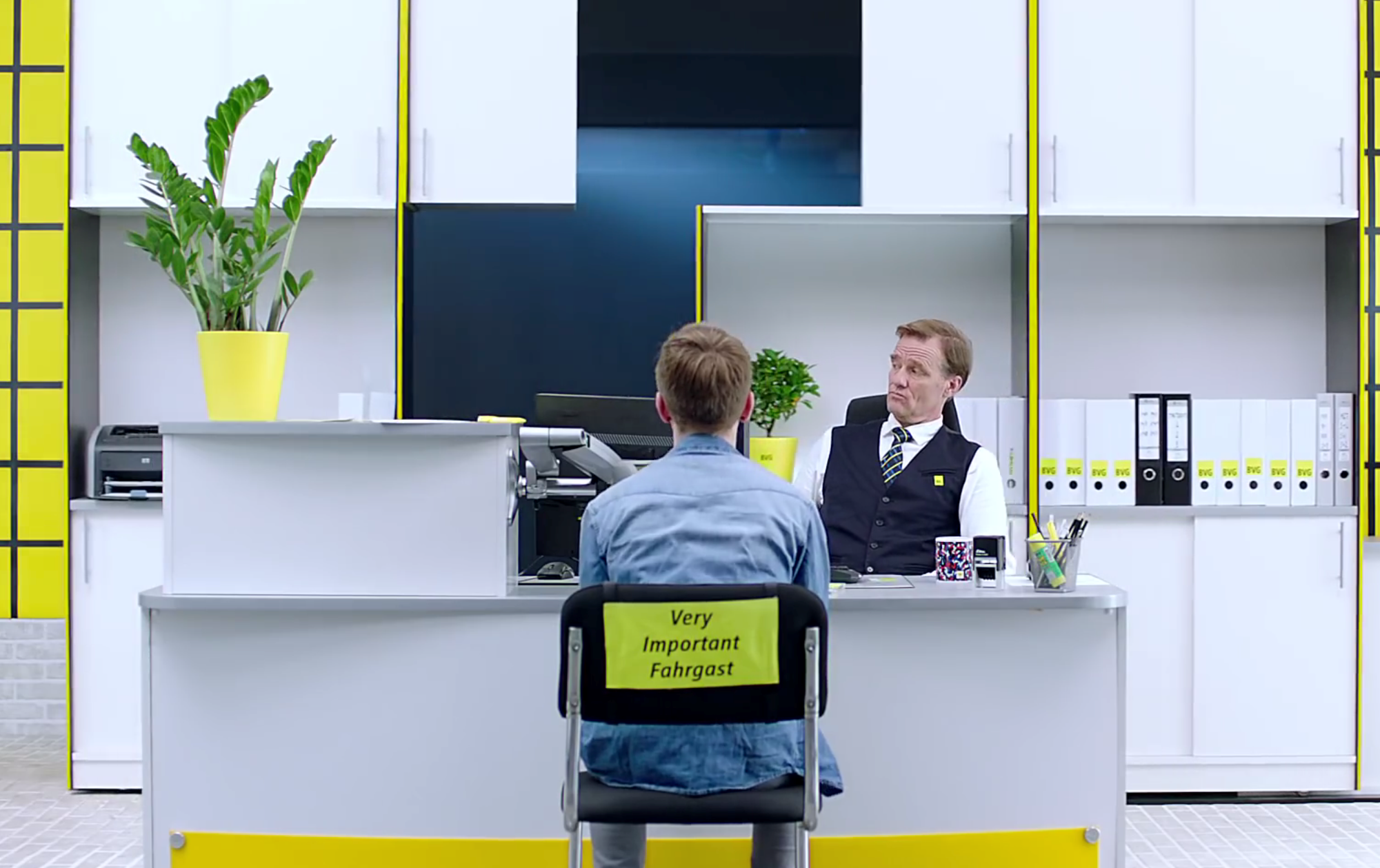 The Berlin Public Transport Company (BVG) launched an image campaign under the slogan “Because we love you” in 2015 – promptly, it found itself knee-deep in a formidable shitstorm. In cooperation with the Berlin communications agency GUD., the company responded to this by adopting the unconventional, self-ironic, and often provocative voice which is still part of the strategy today. Ever since, the BVG is being celebrated on the Internet and by experts. BVG Head of Marketing Frank Büch spoke to The Restless CMO about initial difficulties in striking the right note, the campaign’s success and the limits of provocation.

Mr. Büch, in all honesty: How much persuasiveness was necessary within the BVG to introduce the self-mocking tone, which you have been cultivating since 2015, into corporate communication?

Funny enough, everyone thinks that we had to move mountains. However, at least at the executive level, it wasn’t like that at all. From the very beginning, it was the Management Board that passionately drove the campaign forward and supported it without any ifs, ands or buts. Of course, there were also sceptics within the company. “Love” is, after all, a pretty big word. A word that requires courage. Our Management Board decided that we should muster this courage, even though the shitstorm was raging right from the start. And they were right. In the end, even the biggest sceptics were convinced.

The current tonality was ultimately born somewhat out of necessity, as the previous image campaign had only a mediocre impact on users. So is this whole thing more of a lesson in crisis communication?

Before 2015, we didn’t have an image campaign in that sense. We had a series of individually themed campaigns, a classical sales and marketing tool, but also touched upon topics like safety or consideration. This was received quite positively, but didn’t achieve a great deal of public attention. Berlin and the BVG were like an old married couple: still living together but each reading a different newspaper at the breakfast table. Plus, they didn’t have much to talk about anymore either. We thought it was time for them to look at each other and say: I love you. Time for them to pick up the conversation again. And in Berlin, the best way to get that going is through humor.

How did the customers react?

Well, polarization means that people have different viewpoints. But polarization also leads to greater reach and awareness. And this is precisely the objective of an image campaign. The majority thinks that our campaign is humorous, self-critical and typical for Berlin. We are very satisfied with this result. Ticket sales have increased by more than 12 per cent during the campaign. This is certainly not solely due to the communication, but it has definitely provided leverage.

Despite all of the success, isn’t there still a risk that provocative marketing can even hurt a brand?

This risk exists latently for every provocative campaign. But we had the best possible experience with our campaign. Of course, the daily balance of finding the right tonality is tough, especially in the social networks. It took some practice to go down this rocky road without slipping and falling. In the meantime we are quite happy with the voice we have chosen and the content of our posts.

But aren’t there quite a few who oppose the campaign?

Of course there are also critical responses to our self-ironic approach. But these comments inspire us and give us additional ideas on how we should continue with the voice we have chosen. In other words, we don’t let the criticism challenge the path we have taken.

Where do you see the limits of a campaign like this?

The continuous contact with our users gives us a pretty good idea of how far we can go. The BVG is also proud to be a diversified and liberal-minded company. This attitude is important to us and must be reflected in the campaign. However, a cheeky BVG campaign will never contain elements that slur individuals or groups. All comments and statements can be cheeky, but they still have to be presented in a respectful manner. This is not the right place for remarks concerning politics, faith or religion. It is solely about the image of a company – no more and no less.

Is the success of the campaign measurable? How have the KPIs developed?

Of course the success of a campaign is measurable. We conduct regular brand image measurements and survey our customers on each individual motive, bus slogan and advertising spot. The most recent results indicated that our performance has been rated 1.5 school grades better by people who are familiar with our image campaign than by those who are not.

Based on various surveys, the KPIs have been continuously updated. We currently have an 8-point catalog for evaluating the essential characteristics of the campaign.

How do you define your target group? Does the campaign tend to address a younger audience?

The campaign specifically targets a younger audience, since mobility-related decisions are usually made at a younger age and affect a rather long phase of life. Therefore, our target group is between the ages of 18 and 29.

Are you afraid that you might put people off with the frequently brusque tonality?

Our campaign clearly plays with various clichés and occasionally teases – just like partners in a love relationship. But we do this in a respectful and loving manner – never with the intention of hurting anyone. The recipe for success includes letting your audience in on the joke and the typical brusque Berlin spirit accompanied by its very big heart.

Apropos brusque: Provocative marketing seems to be the current trend. Do you think that more companies will be jumping on this bandwagon?

We have noticed that there are many agencies, as well as marketing departments from other companies who are currently approaching us to find out more about our campaign. I’m not sure if that indicates a trend. However, it does seem like the demand for provocative marketing campaigns is significantly greater now than in previous years.

How important is social media for BVG communication? Describe your strategy.

Social media is important. And the significance is constantly growing, as indicated by our number of users. In addition to the creative campaign channels, we deliberately chose to also carve new paths in service-oriented customer communication from the very beginning.  Parallel to #becauseweloveyou, we launched our info and service channels for subways, streetcars and buses on Twitter. The subway channel alone currently has more than 100,000 followers and the colleagues who twitter on these channels are doing a fantastic job.

In your opinion what differentiates the users of the individual channels?

The simple fact that the Twitter channel limits the number of characters streamlines the content of the tweets and retweets, which occasionally makes them somewhat terse. The challenge here is to package content of greater complexity in brief form. While Twitter keeps it short and sweet, the Facebook comments are often rambling and seem like short stories, which can actually be quite funny. But otherwise, we haven’t identified any specific difference between the channels. And as diverse as the channels are, they each have a great community. And we receive some of our best company-related images on Instagram.

If you look back upon the past two years, what would you say have you learned since the launch of the campaign?

Good communication can actually significantly influence the image of a company. Advertising messages, which are communicated in the style of the communication campaign, automatically have a greater reach and are shared more often than advertising messages that are not integrated. The perseverance and continuity of a campaign play a big role; only when a campaign is in full operation it is possible to recognize and evaluate effects and apply them to evolve the campaign.

For many years now, Frank Büch has held a management position in Sales and Marketing at the Berlin Public Transport Company (BVG) and since 2016 is Head of Marketing. Since that time he is responsible for the image campaign #becauseweloveyou (#weilwirdichlieben). He has years of experience in specifically addressing the topics customer retention and user interface and has managed a wide variety of digitalization projects.